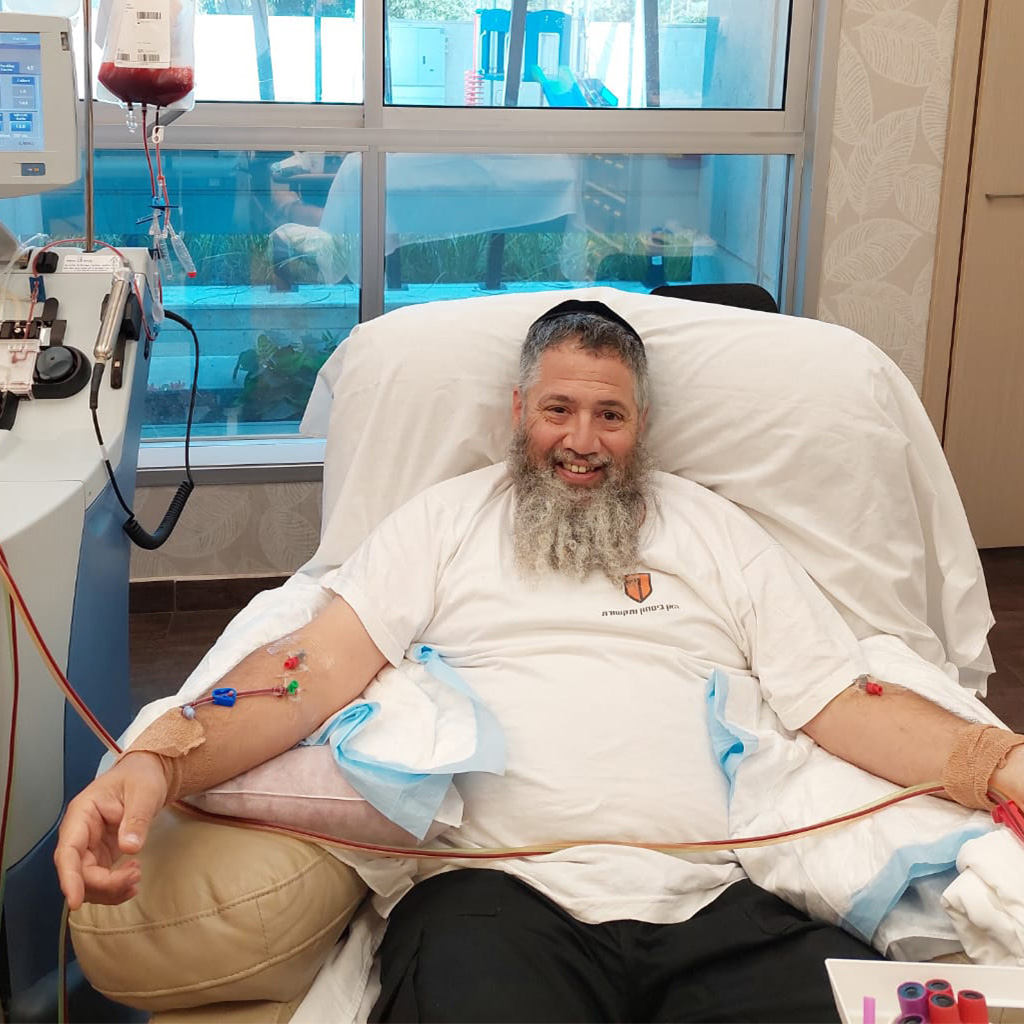 Why should I swab?

You may be a genetic match for a cancer patient whose sole chance of survival is a transplant. You may be able to save a life! The patient may live on your block and be waiting in hope and prayer, with his ear glued to the phone, for the match that will save his life.   But if you are not registered, the medical team will never know. A simple registration enables you to remain on the database for decades, ready to save the life of a desperate young mother or a tiny child whose only wish is to grow up. 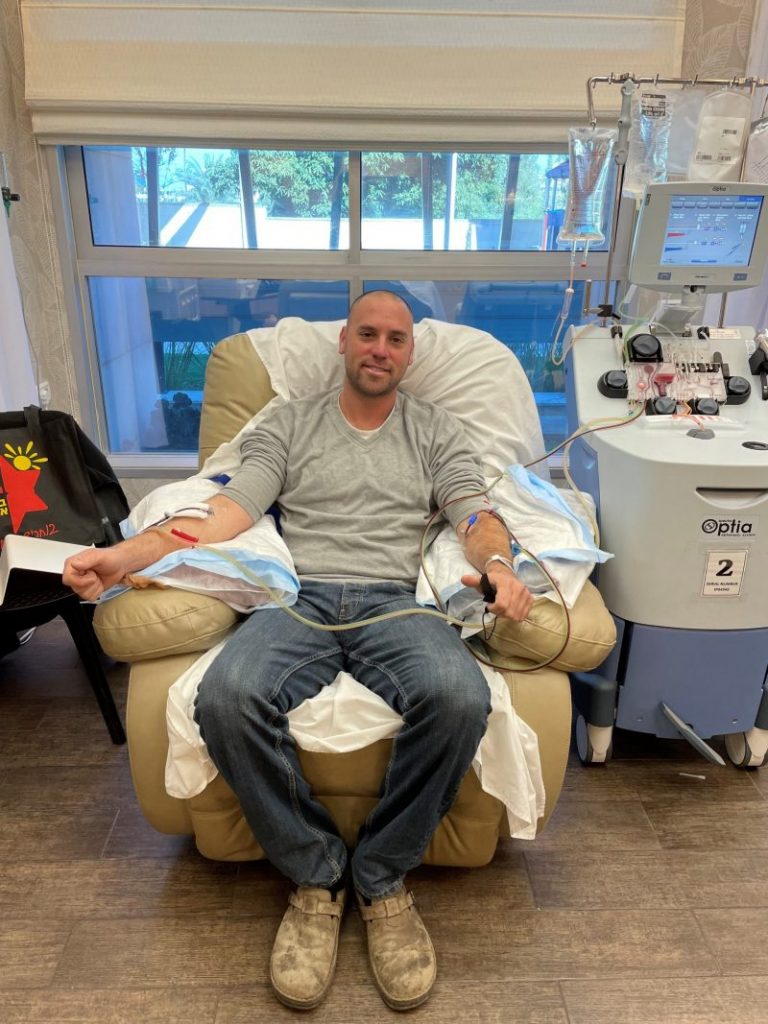 For the vast majority of patients, a transplant is done via stem cells which will produce healthy bone marrow once transplanted into the patient’s body. There is no surgery involved and the donor can resume his routine the next day. . The stem cells are obtained by drawing blood from the donor and separating the stem cells. A tiny minority of patients need a bone marrow transplant. The potential donor is then asked if he would like to go ahead. He can cancel at any stage of the process. 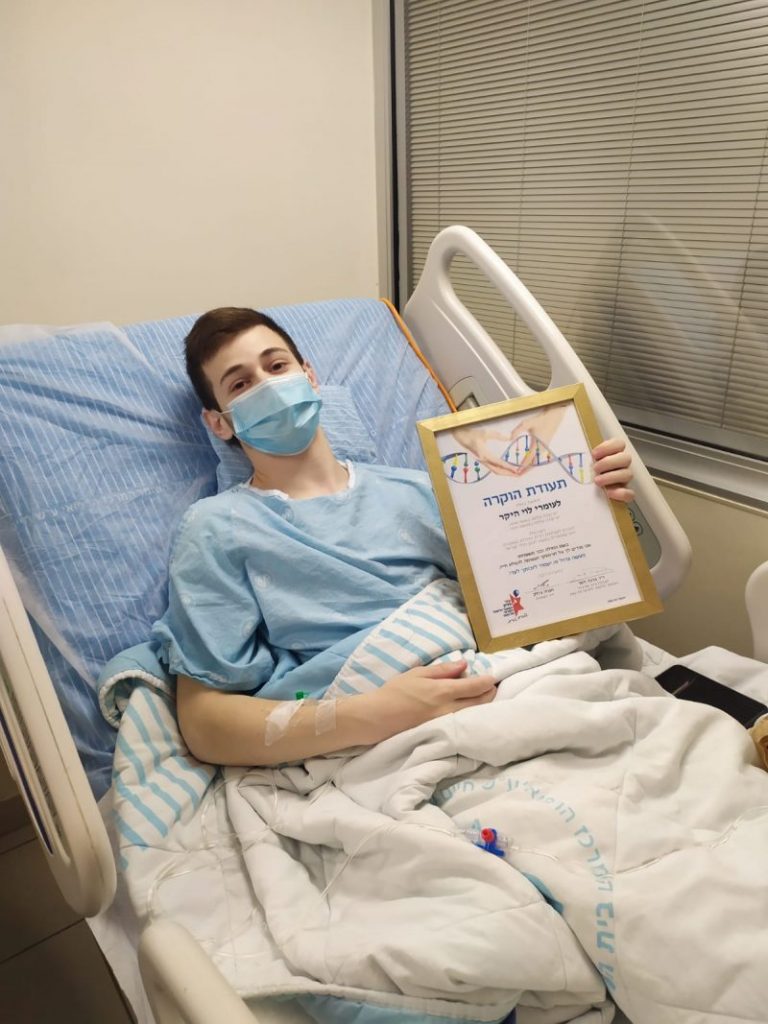 What does it mean to donate?

For several days before the transplant, the donor will be treated to enable his stem cells to increase. The donor will then spend a few hours in a comfortable chair reading or visiting with family as his blood is drawn and goes through the machine that will separate the stem cells, with the remaining blood being returned via the other arm. The process is repeated until enough cells are accumulated. Some donors write letters to their recipients at this time, wishing them well and expressing their deep feelings of connection as they become ‘blood brothers’. That ‘little bag of life’, the cells, are then delivered to the patient and the donor will anxiously await the time (usually about a year) until he is able to hug the person whose life he had saved.

Every 27 seconds, someone somewhere in the world is diagnosed with blood cancer.

You could be someones second chance at life.

Only 30% of all patients are able to find a compatible donor in their family.
Do you want to learn more about how you can register?
Donor info

Sign up for a swab kit online. It only takes 5 minutes. You provide hope. We cover the rest.

It's easy and free to join our lifesaving mission!

Swab the inside of your cheeks and send the swabs back to us. They will be analyzed at our lab to determine your HLA typing characteristics – this is how we match donors and patients

Once we have processed your swabs, we will add you to the global donor pool and you will be available for all patients searching for a matching donor.

How does donation work? 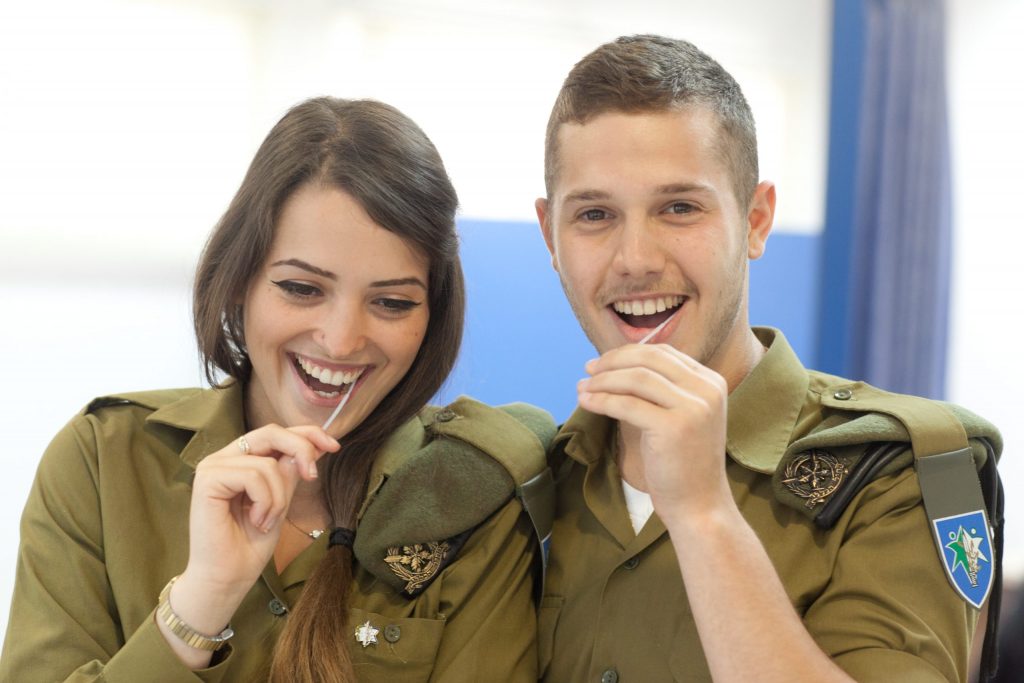 If your HLA typings match a patient who is searching for a lifesaver, we will contact you to start the donation process. 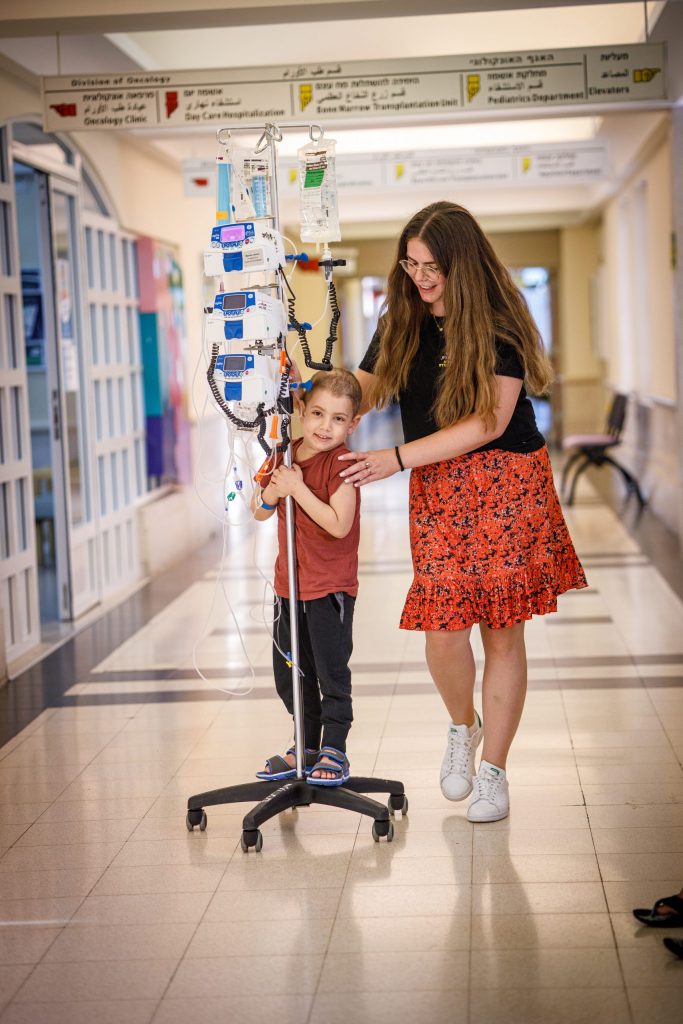 We will help you complete a health questionnaire and a blood test to confirm that you are the best possible match. 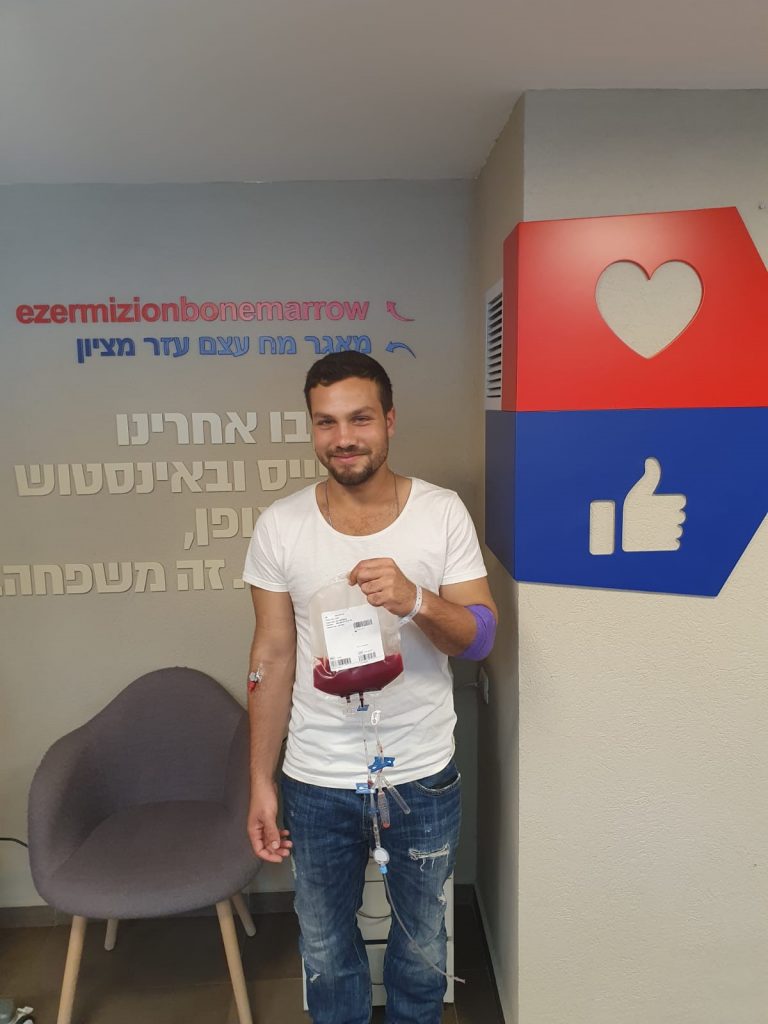 In 80 percent of cases, stem cells are collected peripherally (apheresis). This involves taking stem cells directly from the bloodstream. This is an outpatient procedure and does not require surgery. 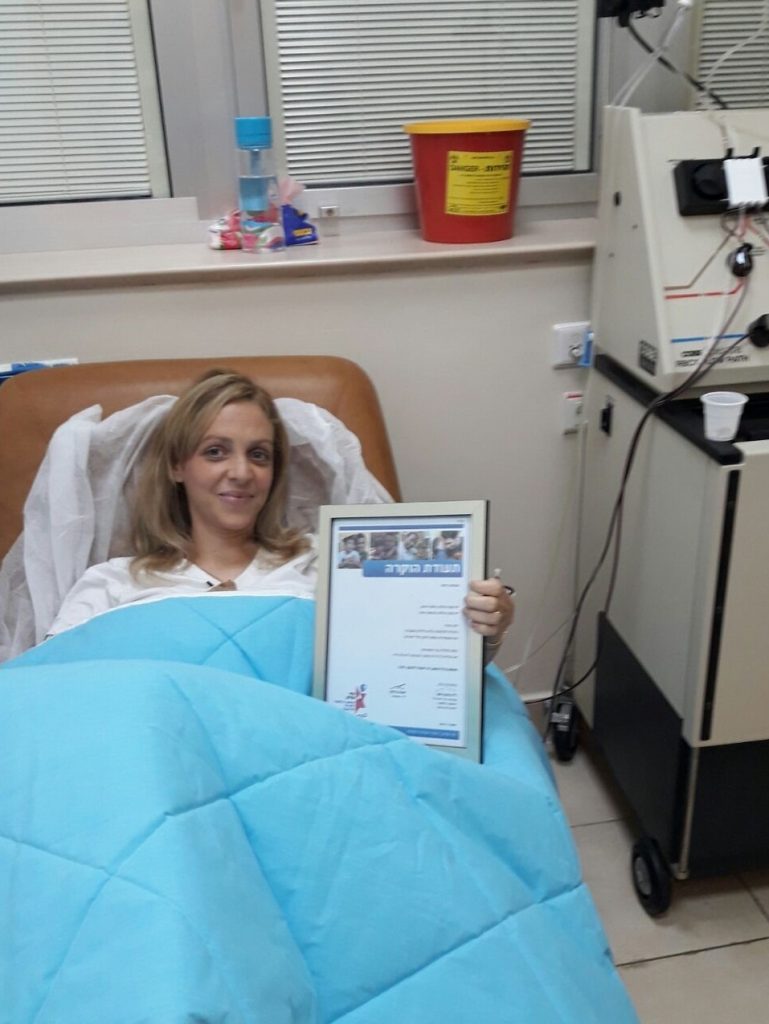 In 20% of cases, the stem cells are collected from the back of your pelvic bone. This carried out under general anaesthetic. 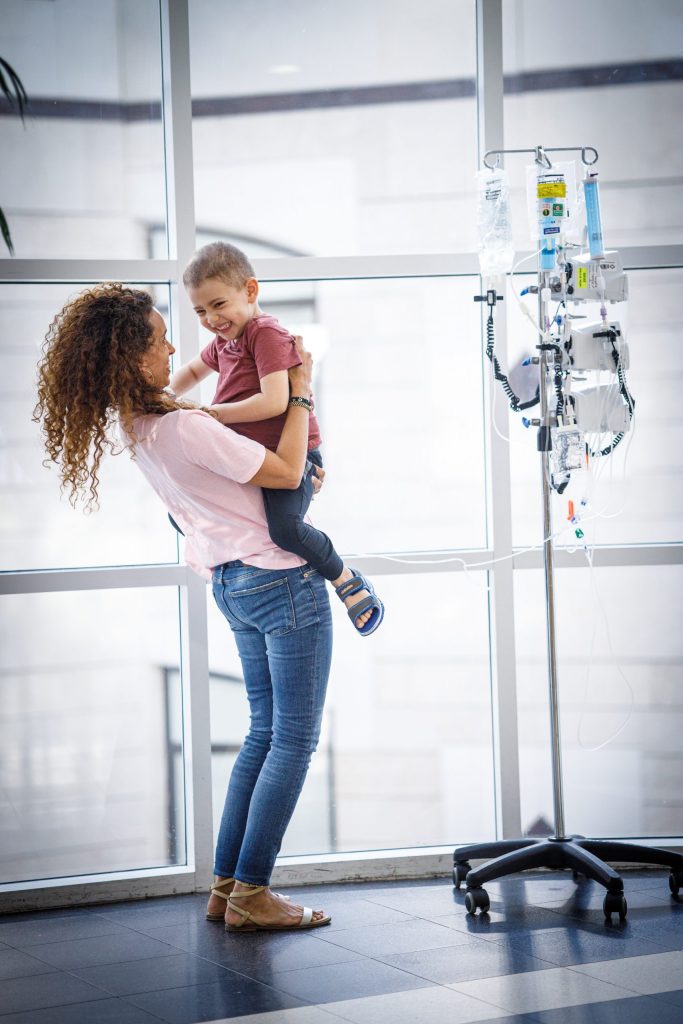 The collected blood stem cells are transplanted to the patient, in a procedure similar to a blood transfusion. A second chance at life

Your donation gives a patient a second chance at life and the chance to beat the disease.

Bone marrow transplants are used as therapy for about 100 different illnesses, including leukemia, Hodgkin’s disease, diseases of the blood, and enzyme deficiencies. These diseases destroy bone marrow, which contains the stem cells responsible for manufacturing blood cells. Chemotherapy and radiation, the most common methods of destroying cancerous cells, also destroy healthy bone marrow cells. For people with diseased or damaged bone marrow, a transplant from a genetically compatible donor is often the only hope for recovery.

Ezer Mizion holds bone marrow drives regularly to register new potential stem cell donors. Each new registrant provides a cheek swab sample, which is used to compare specific genetic markers, known as human leukocyte antigens (HLA) with HLA markers of patients who need a bone marrow transplant. The results are then recorded in the Ezer Mizion registry which is committed to keep the donors and patients information confidential in order to protect their rights and privacy.

Sign up for a swab kit online. It only takes 5 minutes. You provide hope. We cover the rest.

What is blood cancer?

Blood cancer is the generic term for malignant diseases of the bone marrow or blood-forming system, in which normal blood formation is disturbed by the uncontrolled multiplication of malignant blood cells. Because of these cancer cells, the blood can no longer perform its vital tasks, such as fighting infections, transporting oxygen or stopping bleeding.

Blood cancer patients can often only overcome the disease with the help of a stem cell donation from a suitable donor. In the case of leukaemia and malignant lymphomas, the transfer of healthy stem cells is even the only chance of a cure.

A series of malignant diseases in which there is a pathologically increased proliferation of immature and therefore non-functional white blood cells. Malignant lymphomas are divided into Hodgkin’s disease (lymphogranulomatosis) and non-Hodgkin’s lymphomas (lymphatic leukaemia) according to their different characteristics.

Malignant alteration of lymphatic tissue with swelling of the lymph nodes and pathological enlargement of the spleen. Malignant lymphomas are divided according to their different characteristics into Hodgkin’s disease (lymphogranulomatosis) and non-Hodgkin’s lymphomas (lymphatic leukemia), which originate from the lymph nodes.

How does the search for a bone marrow or blood stem cell donor work?

Looking for a matching stem cell donor is like looking for a needle in a haystack. When a blood cancer or blood disorder patient depends on a blood stem cell transplant to survive, they need a donor whose human leukocyte antigen (HLA) characteristics are a 100 percent match, if possible. The patient’s medical team sends a search request to local and international databases. If a potential donor is found to match the patient, the donor center will be informed and the registered donor is contacted immediately.

Four-in-10 patients do not find a matching donor. That is why we need as many people as possible to register as donors.

Who can register as a potential blood stem cell donor?

If you are between the ages of 18 and 45-years-old and in general good health, then you may be able to register as a blood stem cell donor.

If you have previously registered with Ezer Mizion or another donor center, there is no need to do so again, as you will already be available for searches worldwide. If you have been diagnosed with any chronic or serious illnesses (whether current or in the past), please check with us before signing up.

The National Marrow Donor Program has established medical guidelines that we follow to protect the safety of the donor. The following medical conditions would prevent a person from registering as a donor or from being cleared to donate.

Four-in-10 patients do not find a matching donor. That is why we need as many people as possible to register as donors.

Does a donor have to have the same blood type as the patient?

For blood stem cell and bone marrow transplants, what matters is the best possible match between the human leukocyte antigen (HLA) tissue characteristics from the donor and patient. A perfect match is very complicated to find.

Doctors generally look at 10 specific HLA markers to determine a match. Most require at least a 9 out of 10 match, but a 10 out of 10 is best. The closer the match, the better the chances that the patient’s immune system will recognize donated cells as its own and allow them to grow and make new healthy blood cells. When blood stem cells are transplanted, the recipient acquires the same blood group as the donor.

Swabbing is the test used to see if you are a matching bone marrow donor for any patient in need. When you sign up, we send you a buccal swab kit, you swab your cheeks, then send it back to us. Once we receive it, it goes to our lab for processing and then you are added to the National Bone Marrow Registry. Once on the registry, you are put on standby until you are a match for a patient in need.

What are the chances I'll get called to donate?

You could be called as a potential match within weeks of registering. Or, perhaps it will take years. There is a chance that you may never be called, but there is also the chance that, if you do get called, you are the ONLY one who can save that patient’s life.

“It’s just amazing to me that I can live again. I have one more chance at living – to actually be able to do something.” —Darian, transplant recipient and survivor 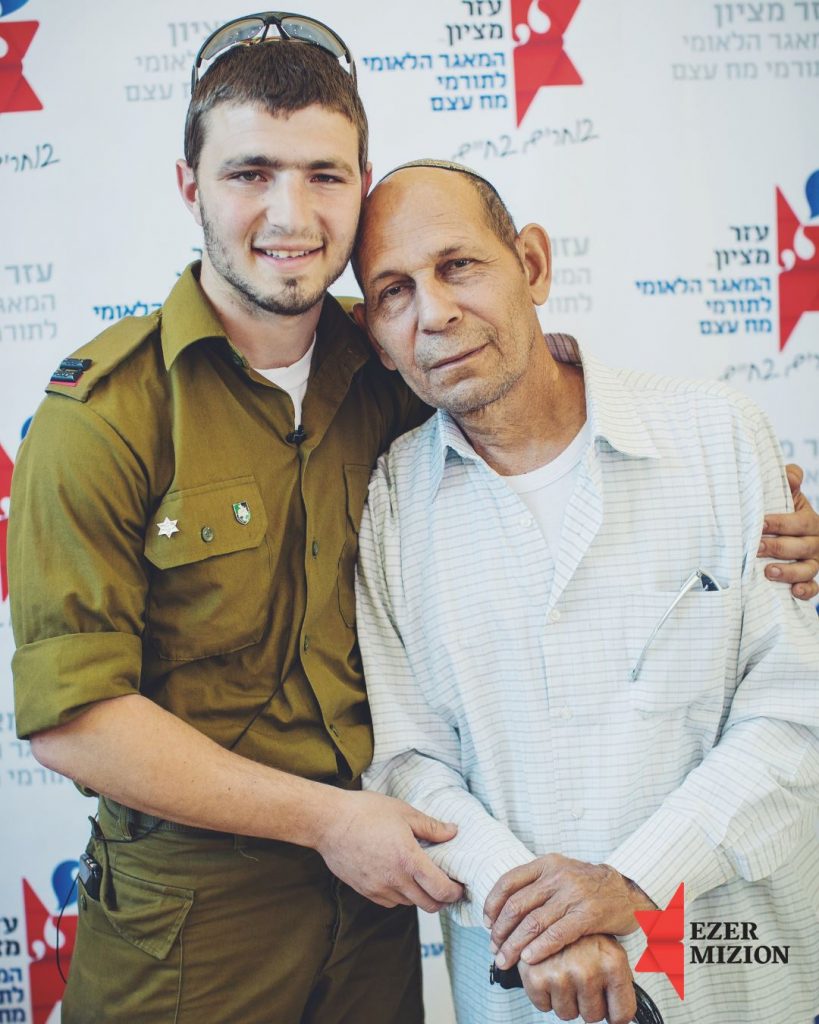 Sign up for a swab kit online.
It only takes 5 minutes.

Help us give others the
chance to live

Enter your name and email and download the flyer.

This will close in 20 seconds